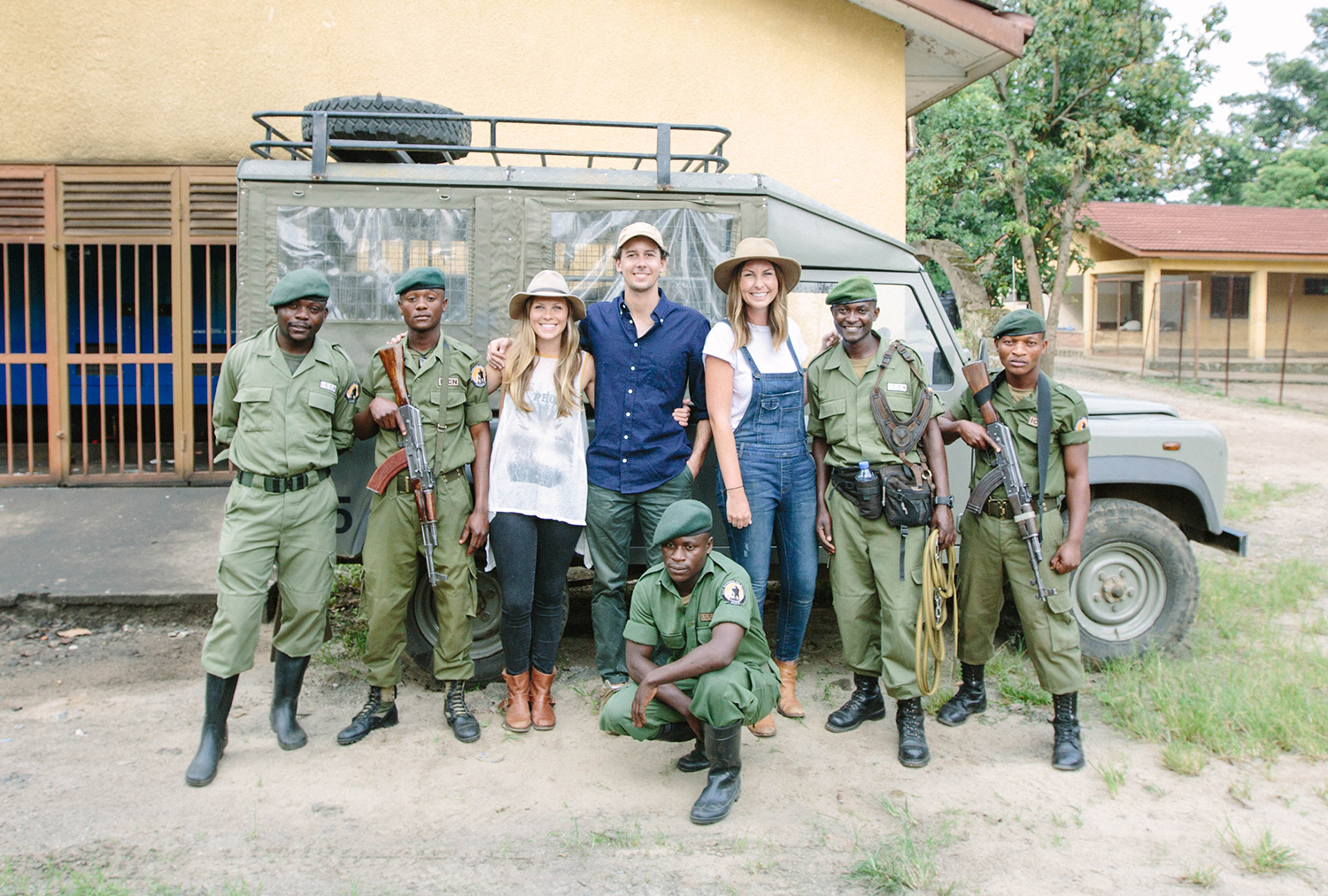 Virunga National Park in Democratic Republic of Congo stole my heart for so many reasons. And considering that the documentary, Virunga, which highlights both the beauty and struggles of the park, is up for Best Documentary Feature in tonight’s 2015 Oscar awards — I thought that sharing my personal journey to this far away place would be perfectly fitting.

I’ve talked about Virunga several times before, but actually visiting and experiencing this incredible, mystifying place was so much more than I dreamed it could be. The park is stunning and completely alive. As we sat on the large deck in the mornings with our coffee, we could hear so many species of birds in the forest beyond. Monkeys, huge groups of them, feasted away at the plentiful, fruit-filled trees above our heads. The jungle was dense and completely green, full of every type of insect and bug known to man. It’s hard to believe that such a peaceful, untouched place has been considered to be one of the world’s most deadly conflict zones. 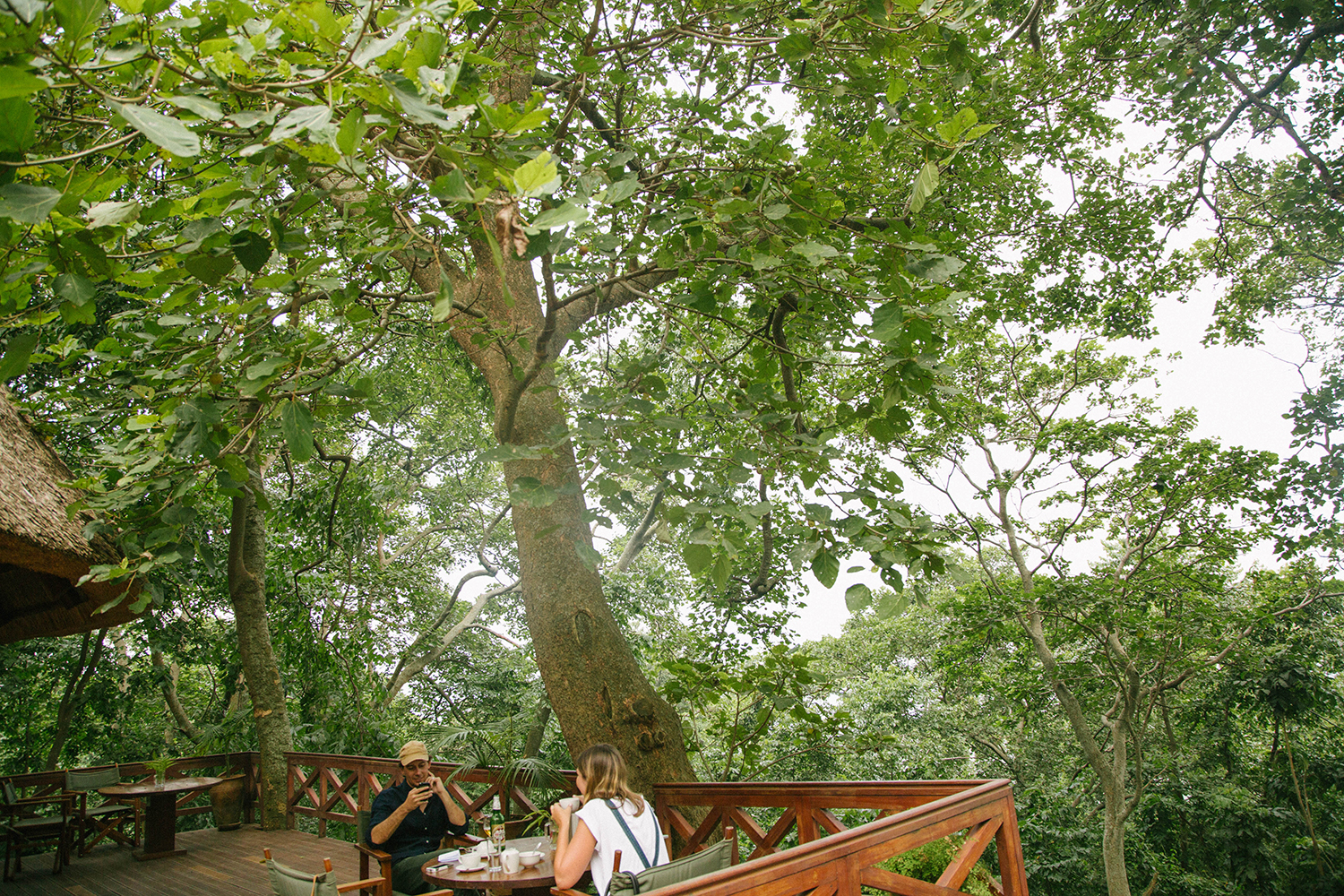 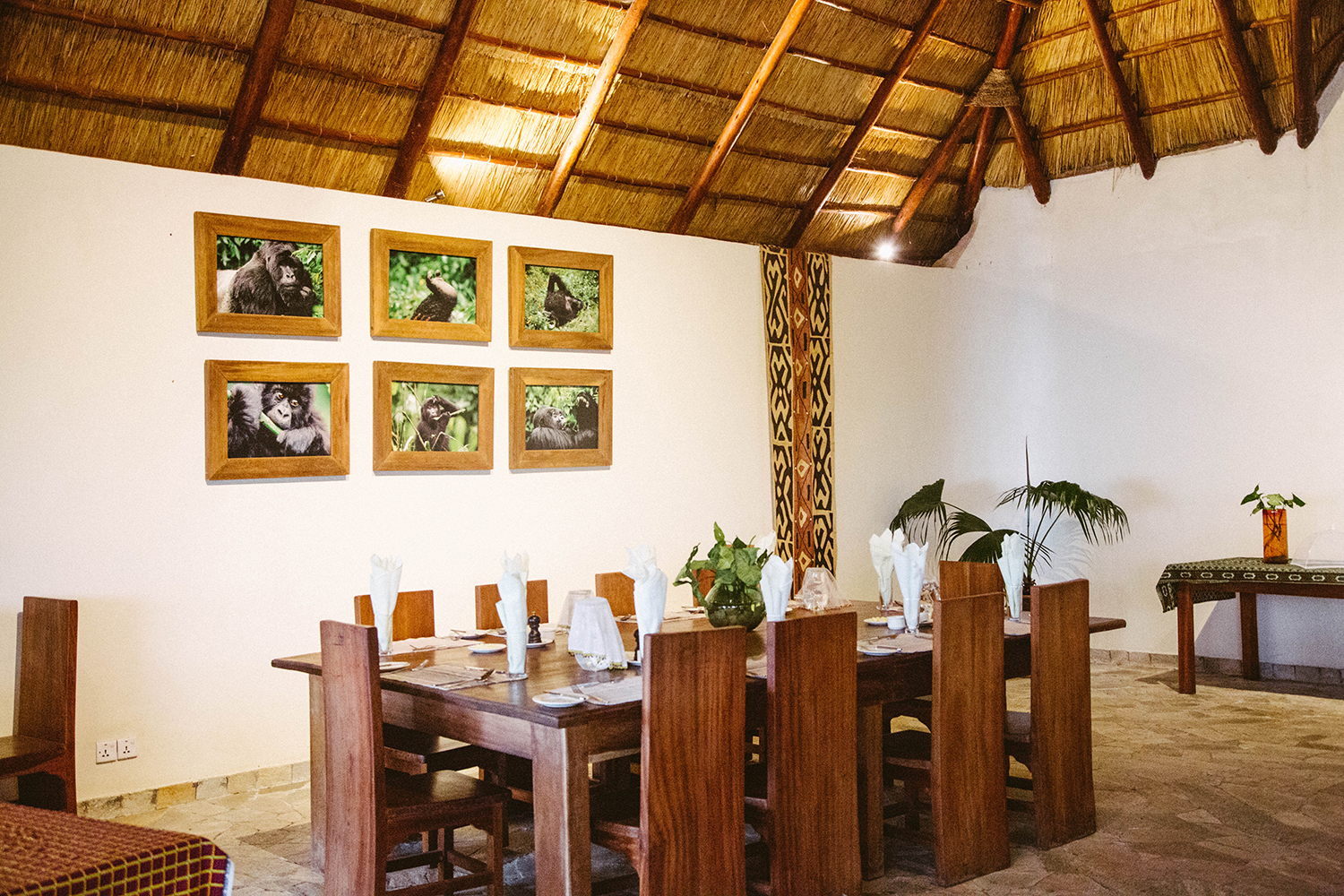 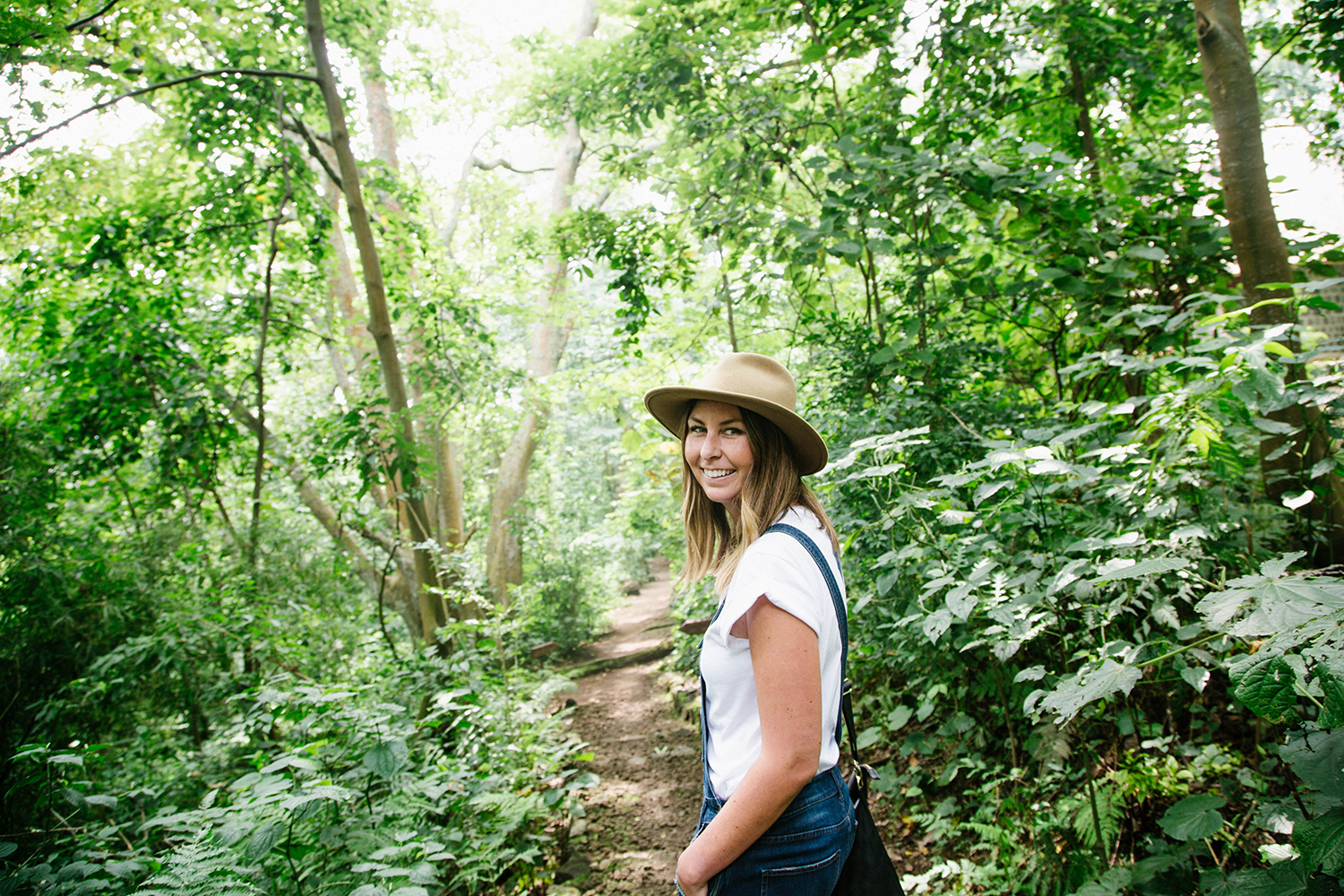 One afternoon, we decided to visit Virunga’s Congo-hounds, famous for their sense of smell and ability to follow a scent trail. Virunga has an amazing program to train these dogs, which is meant to better protect the park’s critically endangered mountain gorillas and other wildlife from poachers.

To showcase the incredible ability of one of the bloodhound’s, a trainer challenged Brittany to take a ten minute hike somewhere completely out of sight and “hide”. All he took from her was a pair of sunglasses she’d been wearing, which would be the dog, Sabrina’s, scent-article. After Britt was long gone, the trainer gave Sabrina an opportunity to smell Britt’s sunglasses. And the moment he commanded it, she was off. We had to jog to keep up with her as she followed Brittany’s scent through the forest to where she was hiding. Sabrina proudly jumped on Brittany upon finding her, wagging her tail with pride. 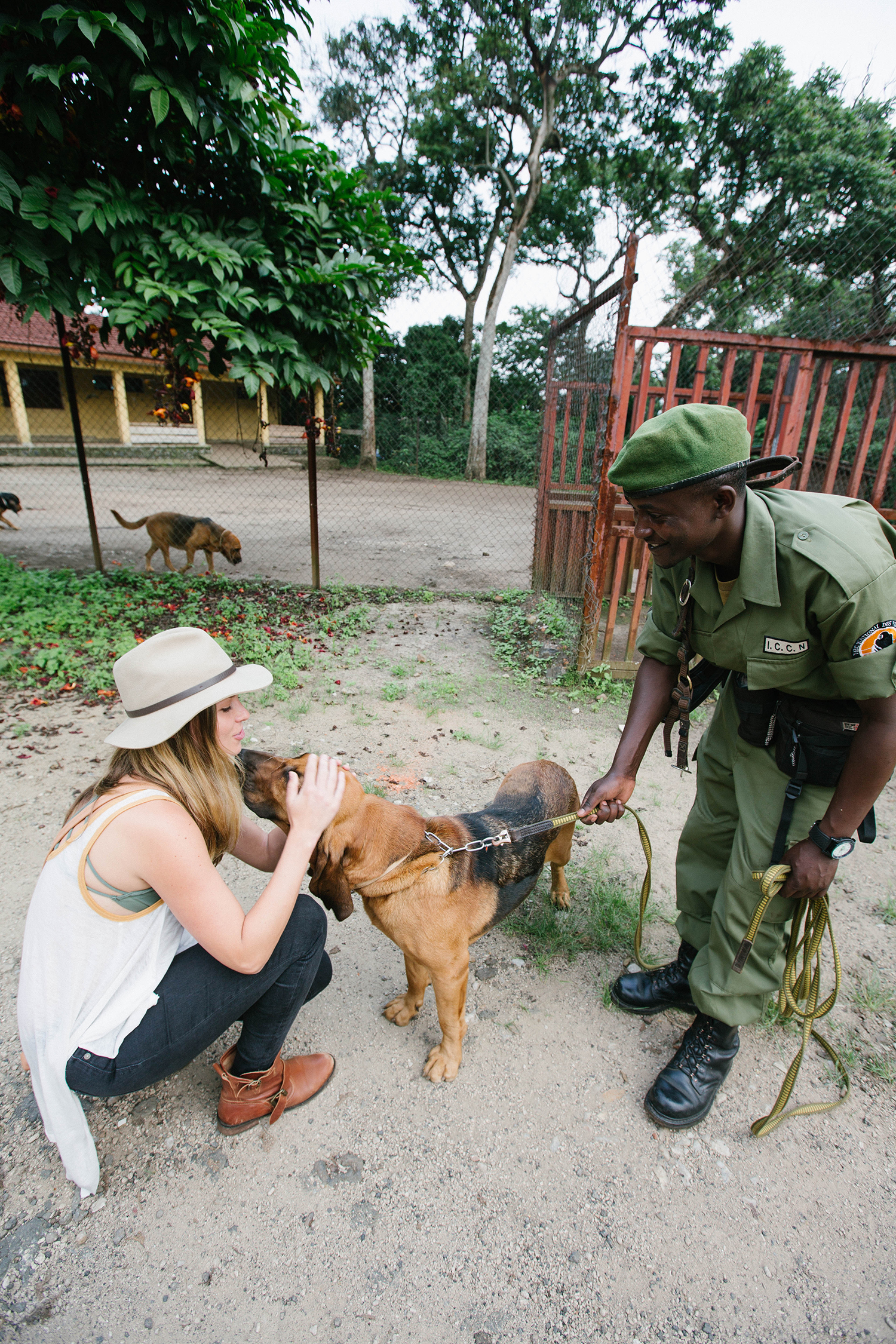 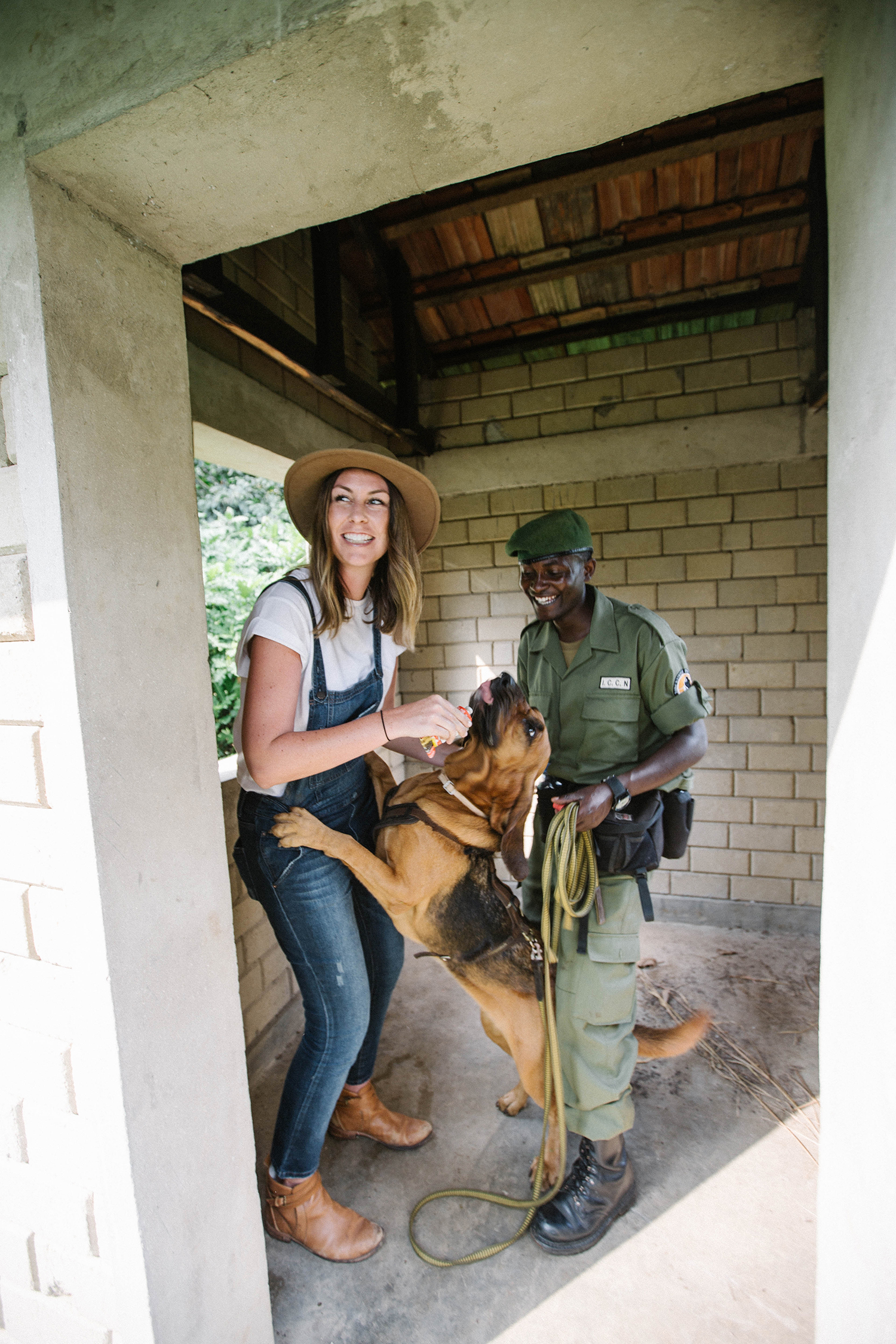 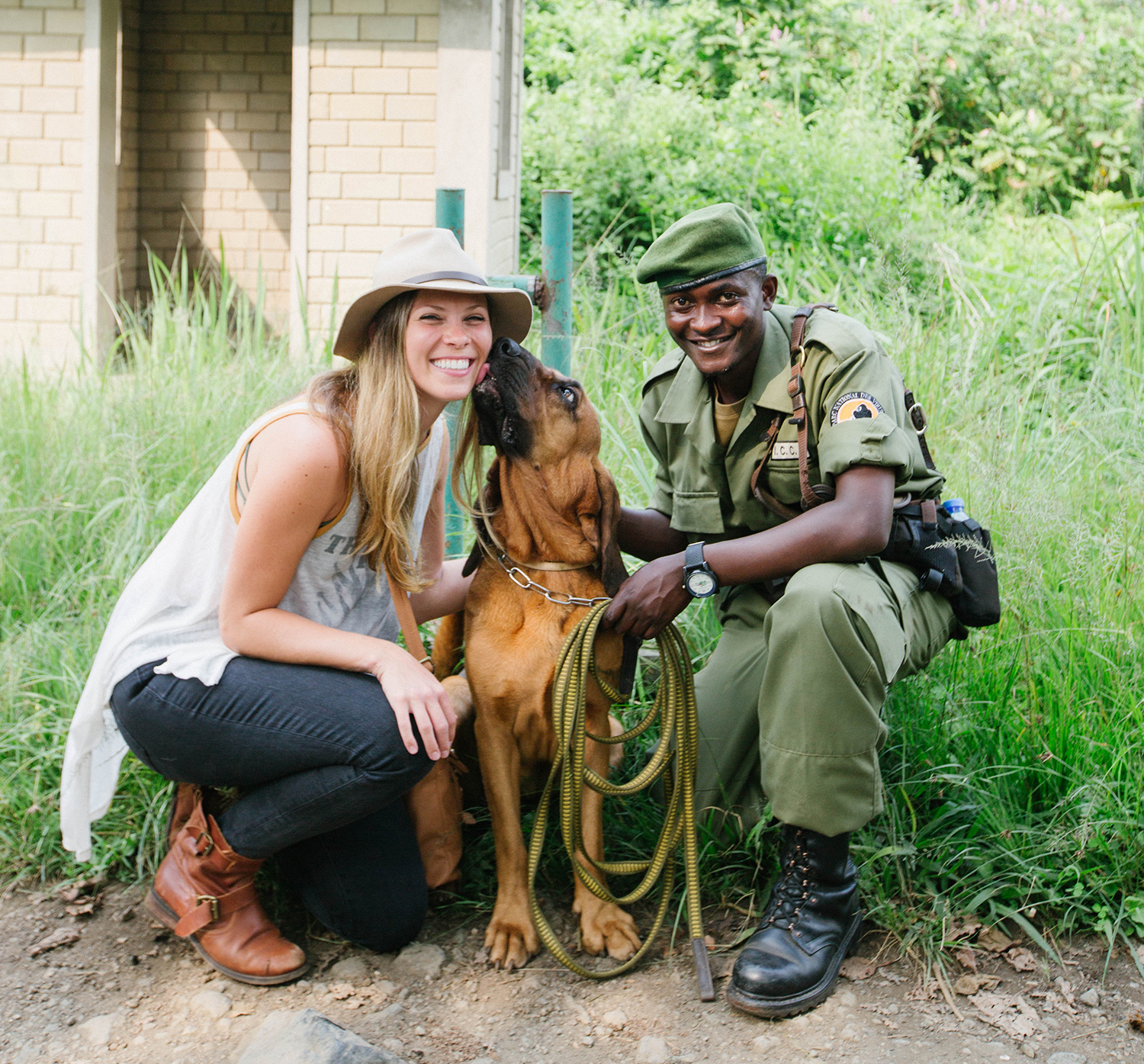 Perhaps the most special part of our time spent at Virunga’s Mikeno Lodge, was visiting the gorilla orphans at the Senkwekwe Mountain Gorilla Center. It is the only facility in the world that cares for mountain gorilla orphans, and each of the gorillas currently living at the center was victimized by poachers or animal traffickers and lost family members to them. Fortunately, these gorillas are now living in safety, in a huge forested enclosure where they eat lots of fruit, climb trees, tease one another, and fight for the affection of their human caregivers. It was incredible to witness. 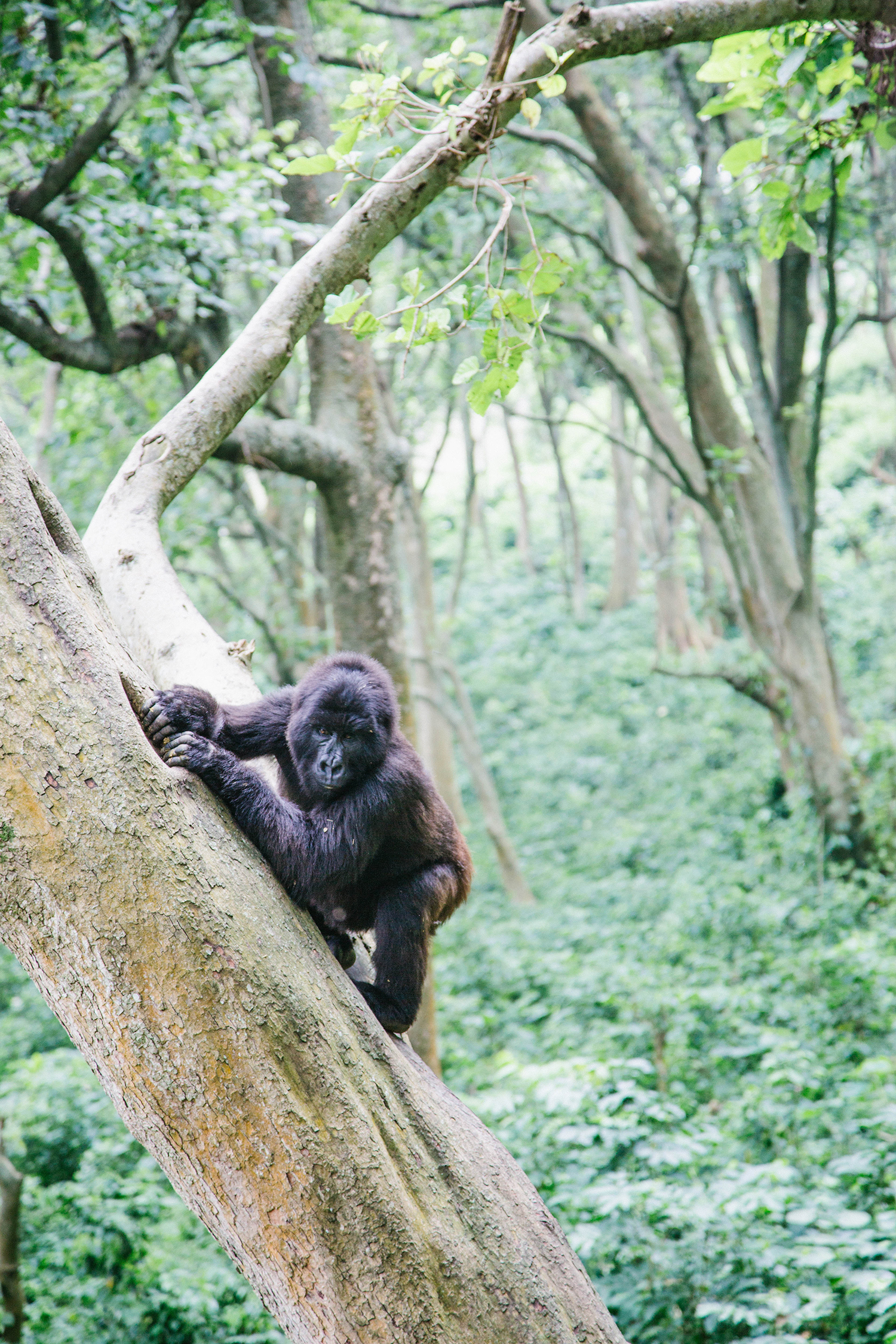 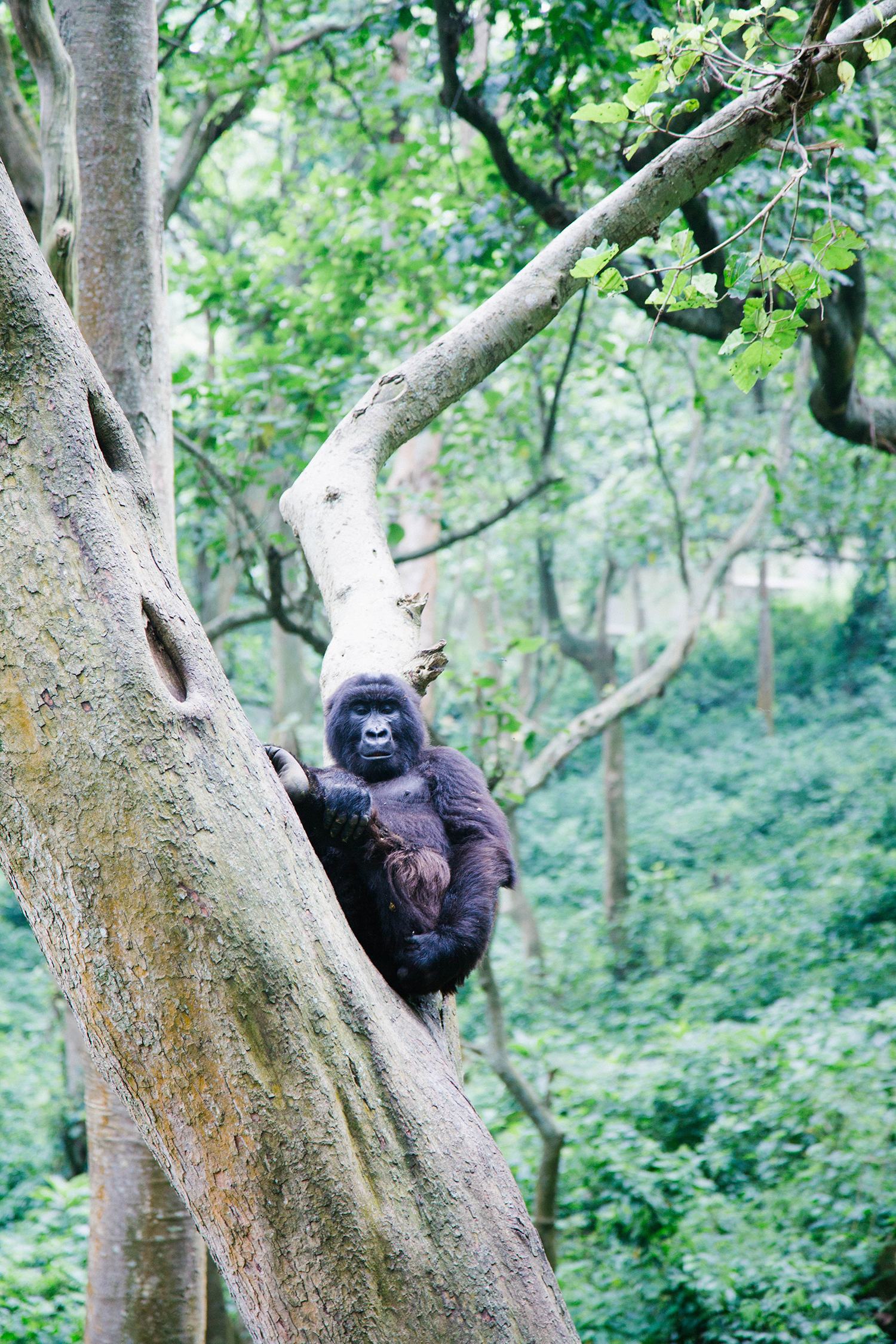 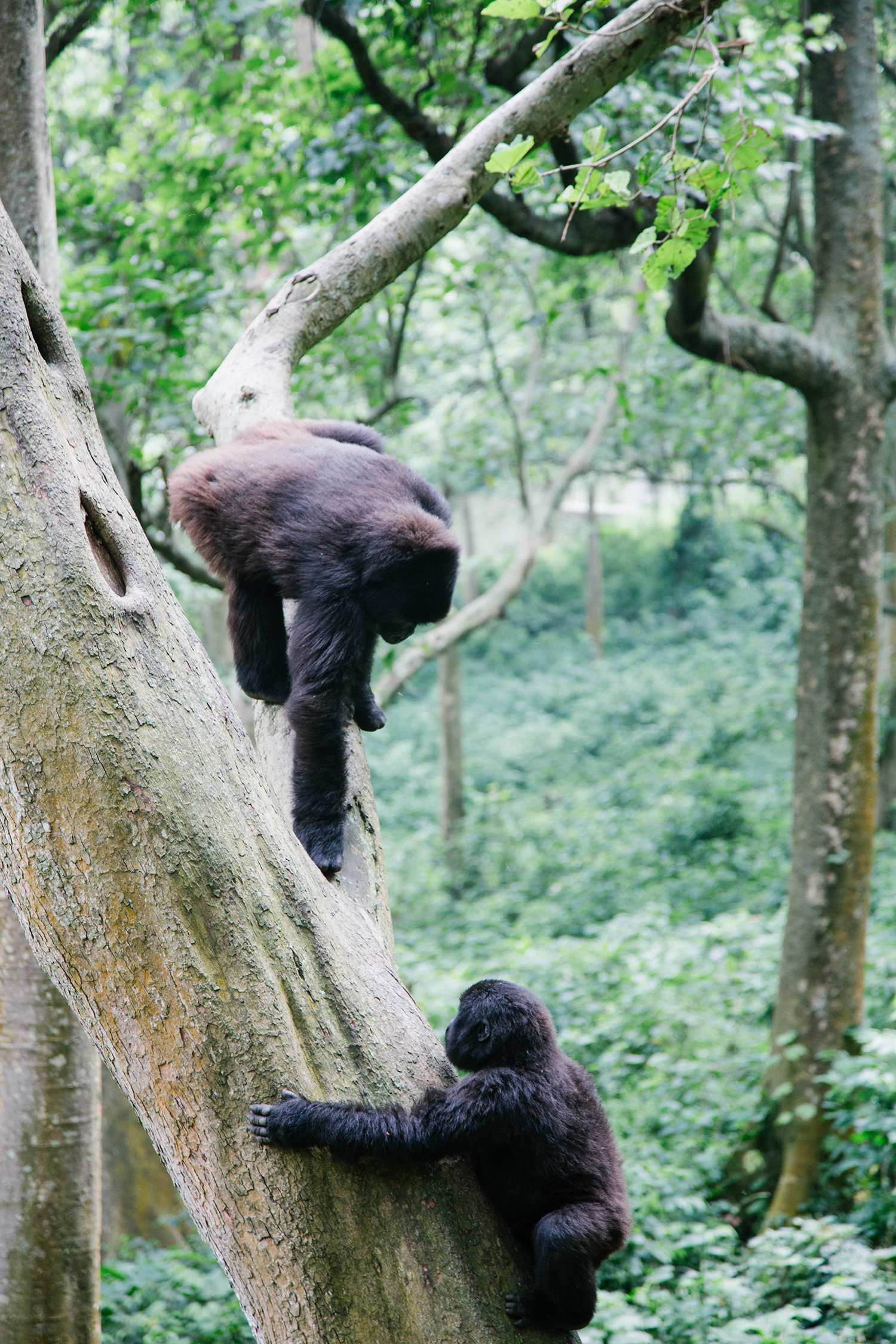 I’m so thankful for the opportunity to experience a park that boasts two-million acres of Africa’s most diverse ecosystem. We gawked at chimps, gorillas, and bloodhounds, and grew so in love with this awe-inspiring, forested retreat in DR Congo.

Hi Courtney! Thanks for all the wonderful information! My partner and I are looking at visiting the Virunga Naitonal Park as part of our East/South Africa trip at the end of the year. Maybe I missed the information, but did you book this trip through a local operator? We’re looking at going overland from Rwanda, as this will be the most convienent with the rest of our trip. Any suggestions for other parts of Eastern Africa? Many thanks and love in advance!

I booked my trip through the Virunga website…I also went overland from Rwanda…A ranger picked me up at the border and took care of all my documents!
The adventure already starts when driving from the border to the NP :)
You can always check the virunga website for more information!

My wife and I will have 10 or 11 days for this trip. Do you suggests doing something besides this park if we have this amount of of time? Just wondering how others make this a complete trip or if all of it should be used for this park. We want to do the volcano hike and stay and we also want to do the other things the park offers but I want to take full advantage of our time and that is not a lot written about how to make this trip. Thank you for writing this. It is a great resource.

We booked our trip starting December 9th in the Congo. We are doing two days gorilla trek and the volcano. This journal inspired us so thank you. We bought some things from you also. Congrats on the baby.

We just finished our two gorilla treks and summit up the volcano. Incredible inexperience that all started from this journal. Thank you.

Thad & Kristin,
So happy to hear that you had a great time! Such a once in a lifetime experience, isn’t it? Thanks for following along the journal. And happy holidays!

It was great to read your post. I am planning to visit Virunga on my honeymoon next January. My only concern (like many people) is security. Did you have any problems crossing the border? Was it fairly straightforward to get there from Kigali?

DRC felt pretty safe while we were there, but of course, “safety” is relative. I’d say you have nothing major to worry about — especially since you aren’t traveling alone. My recommendation is to spend one evening in Gizenyi and then cross the border into DRC the next morning. The border crossing went relatively smoothly for us, but we’ve heard from many people that it didn’t go quite as well for them. They got haggled, got their passports taken for no apparent reason, etc. Just make sure you have booked your stay at Virunga/Mikeno Lodge PRIOR to arriving, have arranged for a Visa with the lodge, (they do this for you) and have a contact name/number at the lodge in case anything goes wrong at the border and you need to call someone. This is super important.

Once you cross the border, I’d recommend taxing a taxi into Goma and staying at Lake Kivu Lodge Hotel. It’s a little oasis and has great food! If you plan to hike the volcano, arrange to have a Virunga driver/vehicle pick you up from the hotel early the next morning and take you to the base, where you’ll start your hike from. The hike takes all day and is super challenging — make sure you have good hiking gear: hiking pants, thick wool socks, comfortable hiking boots, a rain jacket and a few layers that you can peel off if it gets hot during the hike. At the top, it’s SO, SO cold. I can’t stress this enough. Bring a beenie, gloves, heavy jacket, etc. You’ll also need to bring a sleeping bag, but they provide the tent, pillow and sleeping mat. Oh, and you have to pack your own dinner/drinks for the evening! The next day, arrange to have a driver take you from the base over to Mikeno Lodge. It’s absolutely stunning! From the lodge, you can do chimp trekking and go to the gorilla orphan center, which is just a short walk from your room. When you check out of the lodge the next day, arrange to have a Virunga driver take you back to the border where you came in. Leaving DRC was easy and then you’re back in the safety of Rwanda! Yay! :)

Love this! Heading to the DRC, Rwanda and Uganda later this year and so looking forward to the experience. Looks absolutely incredible – I love your photos!

Thank you! Have a great time!

Hi Courtney! I am planning to visit Virunga in 2016. When did you go there? My main concern is security. I might be traveling alone and I am a bit worried about the transportation from Kigali to the park. did you feel safe, can you share your experience regarding this? thank you!!

Hi Stephanie, sorry for the late reply on this! I actually just responded in length to another commenter (Kate) so read that and let me know if you have any other questions. :) Have a great trip!

Hi Stephanie, I’m also planning a trip to Virunga, I’m planning to go in october…
Interested in travelling together?

I know it is late but I just found this discussion and my wife and I will be visiting Virunga the week of November 8, 2016 if you want to join us. Feel free to email me at dolezalbob@yahoo.com if you want more information on our plans.

And thank you for the information on your trip Courtney. IT was fantastic!!

Sorry for my late reply as well! I went alone in October and I really loved it! No security problems! Had an amazing trip and loved every minute of it!

Hello Isabelle, Did you end up going in November? I am planning on leaving in 2 weeks. There are a few recent security concerns that are leaving me hesitant. A park ranger was killed 2 days ago, another ranger wounded and 3 or 4 other pro-conservationists were killed in the central sector of the park. We are going to be in the southern sector. Should I be concerned or is the southern sector so far from the central that I can put my mind to rest? I’m just trying to find someone who has been there very recently and see what their experience was. Thank you in advance.
christina

Hi Christina
Sorry for the late response…totally forgotten..
I hope you had an wonderfull and safe stay !
isabelle

This is such a great blog, I found you via a tweet on Virunga’s twitter page. I want to turn my life over to saving the beautiful creatures unfortunate enough to be caught in the middle of man’s wars. Did any of the gorillas in captivity come close enough for you to touch? I have to go read more of your blog! :)

Tiffany, so glad you found us! Unfortunately, we were’t able to get very near the gorillas because humans can so easily transmit diseases to them — but it was such an incredible experience nonetheless!

Amazing! You make me want to travel Africa, girl!

Janis, thank you so much! I just officially got sucked into your blog and Instagram… looks like you do some incredible traveling yourself. Can’t wait to follow your adventures. :)

I have a good friend who is there supporting and helping the rangers. Occasionally he sends me pictures of the park and elephants. Beautiful park. Thank you for the posts about Virunga. I wish there was a way I could help.

Judy, that’s amazing that you have a good friend there! Such an incredible park and cause to become involved in. :)

I love the picture of the bloodhound licking your face! And I just want to snuggle those gorillas. :)

haha.. Sabrina licking my face was definitely a highlight. Such a sweet dog. I’m with you — all I want to do is snuggle the gorillas too. :) Hope you’re well!

I’m dreaming of this place now – it’s so untouched and lovely! What I wouldn’t give to experience it. Thanks for sharing! :)